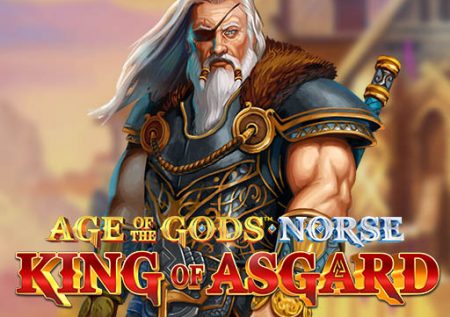 Age of the Gods Norse – King of Asgard

Age of the Gods Norse – King of Asgard Slot

Join Odin and Loki in the battle for Asgard in the epic slot Age of the Gods Norse – King of Asgard. The mighty Odin Wild increases the final spin multiplier every time he advances during the respins feature.

Land Loki on the reels to push Odin back for more spins and a higher multiplier! Get unlimited stacked wild respins with unlimited win multiplier on the final spin.

Odin’s Fury Respins offers an unlimited number of respins with a stacked Wild symbol. On each respin, the win multiplier increases by 1.

The first instalment in a new series: Age of the Gods™ Norse, the game has three optional levels. The three levels are Extra, Daily and Instant Jackpots. The Ultimate Jackpot is tied in with the well-known Age of the Gods™ series Jackpot.

Every time a stacked ODIN WILD symbol lands on reels 2, 3, 4, 5 or 6, the Odin’s Fury Respins feature will be triggered.

When the feature activated, the reels will respin and the stacked ODIN WILD will become a shifting stacked WILD that moves left to the adjacent reel with each respin.

With each respin, the final spin multiplier increases by 1.

When a LOKI WILD lands on the left of ODIN WILD during Odin’s Fury Respins, it will move ODIN WILD 1 reel to the right.

The reels will respin until the ODIN WILD symbol reaches reel 1, at which point the final spin multiplier becomes active and multiplies any wins formed by the value shown on this respin.

Age of the Gods™ Norse Jackpot

Sign up for 100 No Deposit Spins!
DON'T MISS OUT! Subscribe to our bi-weekly newsletter and get access to tournament codes, the biggest and best exclusive offers, new brand alerts, rogue reports and more![newsletter_form type="minimal"] Not for residents of Great Britain. By subscribing you are agreeing to our Privacy and Cookie Policy.
©Copyright 2022 MegaBonusCasino.com l All rights reserved.

This website uses cookies to improve your experience while you navigate through the website. Out of these cookies, the cookies that are categorized as necessary are stored on your browser as they are essential for the working of basic functionalities of the website. We also use third-party cookies that help us analyze and understand how you use this website. These cookies will be stored in your browser only with your consent. You also have the option to opt-out of these cookies. But opting out of some of these cookies may have an effect on your browsing experience.
Necessary Always Enabled
Necessary cookies are absolutely essential for the website to function properly. This category only includes cookies that ensures basic functionalities and security features of the website. These cookies do not store any personal information.
Non-necessary
Any cookies that may not be particularly necessary for the website to function and is used specifically to collect user personal data via analytics, ads, other embedded contents are termed as non-necessary cookies. It is mandatory to procure user consent prior to running these cookies on your website.
SAVE & ACCEPT