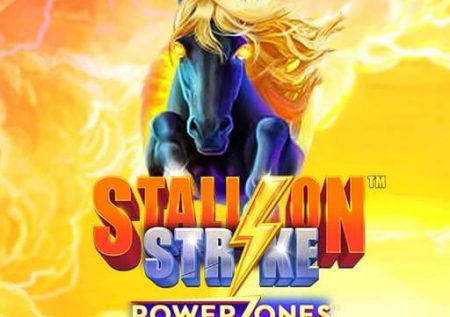 Charged symbols spark the fun and great wins in this striking 15,625-ways slot. Make, expand and link “Power Zones” that convert symbols into the same type for thundering wins.

Win up to 50 Free Games and land Scatters for retriggers, then transform all Power Zones into a mystery symbol on the Mega Spin. You also get the option to buy Free Games to trigger the feature whenever you want!

Free Games can be retriggered, and the final Mega Spin transforms all the symbols in all Power Zones into the same mystery symbol for awesome payout potential.

Players can also use the Buy Feature to trigger the Free Games, and the Mega Spin feature whenever they want.

On any main game or free games spin, any symbol, except WILD or BONUS symbols, can appear as charged symbols.
Charged symbols will have a blue circle appearing around them, and they lock the Power Zones on the symbol position they land on.

When a charged symbol appears in a Power Zone, all symbols in that zone convert to the same symbol type as the charged symbol. Power Zones disappear after the symbols have transformed.

3 or more Bonus symbols will activate the Free Games plus the Mega Spin feature:

When there are no more free games left, the Mega Spin is triggered. In a Mega Spin, symbols in all Power Zones convert to the same mystery symbol.

Buy Feature is an optional way to manually trigger the Free Games + Mega Spin feature.
Each fixed option offers a different number of free games and costs a different amount.

Sign up for 100 No Deposit Spins!
DON'T MISS OUT! Subscribe to our bi-weekly newsletter and get access to tournament codes, the biggest and best exclusive offers, new brand alerts, rogue reports and more!

This website uses cookies to improve your experience while you navigate through the website. Out of these cookies, the cookies that are categorized as necessary are stored on your browser as they are essential for the working of basic functionalities of the website. We also use third-party cookies that help us analyze and understand how you use this website. These cookies will be stored in your browser only with your consent. You also have the option to opt-out of these cookies. But opting out of some of these cookies may have an effect on your browsing experience.
Necessary Always Enabled
Necessary cookies are absolutely essential for the website to function properly. This category only includes cookies that ensures basic functionalities and security features of the website. These cookies do not store any personal information.
Non-necessary
Any cookies that may not be particularly necessary for the website to function and is used specifically to collect user personal data via analytics, ads, other embedded contents are termed as non-necessary cookies. It is mandatory to procure user consent prior to running these cookies on your website.
SAVE & ACCEPT